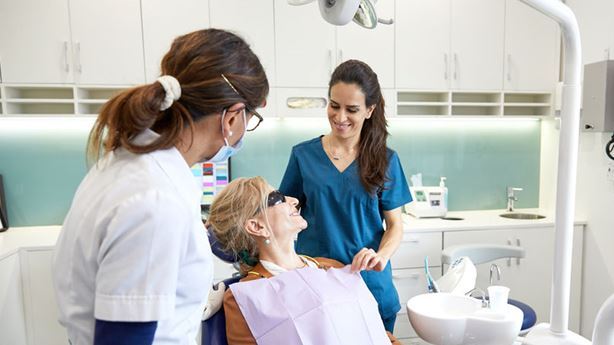 As far as our oral health is concerned, it’s very important to keep the gums healthy, as well as the teeth.

The gums are amongst the most sensitive parts of the mouth and are prone to all kinds of ailments and health issues, including periodontitis, better known as ‘gum disease’.

Often confused with gingivitis, periodontitis can create all manner of health issues and problems for those affected, which is why you need to speak to your dentist straight away if you even suspect that you may be suffering with the condition.

If you speak to your dentist, they can then offer you a wide range of treatment options, including laser treatment which is what we’re covering in today’s topic.

Is laser periodontal treatment effective, what does it entail, and why is it so commonly used to treat periodontitis?

What is periodontal disease?

Also commonly referred to as ‘gum disease’, periodontitis is a condition affecting the gums caused by an accumulation of bacteria in and around the teeth and gums.

In the early stages of the disease, the gums will become swollen and inflamed, which will of course be painful. The gums also begin to recede away from the teeth, forming small pockets between the teeth and gums. It is within these small pockets that bacteria is allowed to accumulate and breed.

As time progresses, so too does the periodontal disease causing a wide range of symptoms which we’ll address shortly.

In very extreme cases, the teeth may become damaged, and possibly even destroyed entirely. This is yet another reason to seek help from your doctor.

Because there are so many health issues out there affecting the teeth and the gums, knowing the signs and symptoms of periodontal disease is very important.

Now, the symptoms that you experience will depend upon the severity of the condition, but generally, some common signs and symptoms of periodontal disease include the following:

What is periodontal laser treatment?

One of the most common questions surrounding periodontal disease is ‘is laser periodontal treatment effective?’ and the answer to that is – yes.

Periodontal laser treatment is hugely effective, but what the heck is it? Basically, this procedure is used in conjunction with other oral care treatments and techniques. Your dentist will use a specially designed laser to destroy and remove any inflamed gum tissue around the root of the tooth.

After that, plaque and/or tartar around the gumline will also be removed, before a new tool is used to smooth out rough spots located on the teeth both above and located below the gumline.

What are the benefits of laser treatment for gum disease?

There are many different treatments available for gum disease, yet laser treatment is considered to be one of the best.

In terms of is laser periodontal treatment effective, one of the main benefits associated with using lasers is the fact that it has been found to limit and reduce bleeding.

Another benefit of laser periodontal treatment is the fact that, as it is far less invasive, the recovery time is much faster so you can make a full recovery much quicker.

As we’ve mentioned several times now, laser treatment is much, much less invasive than some treatments and procedures out there. There’s no need for any knives, scalpels, or needles, making it far less invasive.

The great thing about laser treatment is the fact that the laser instantly cauterizes any wounds, instantly sealing them.

Open wounds are exposed to bacteria and provide ideal breeding conditions for bacteria to thrive. Laser treatment means there is no open wound and that the risk of infection, therefore, is minimal.

Do gums grow back after laser surgery?

If you do require periodontal laser treatment, you’ll likely have questions regarding the gums and whether they will grow back following the procedure.

The truth of the matter is that the gums very rarely grow back after laser treatment, meaning that the results are in fact permanent.

How to prevent gum disease

Despite laser treatment being so effective when used to treat periodontal disease, prevention is in fact better than cure, which is why looking after your gums is so important in terms of preventing gum disease.

Some ways to prevent gum disease include:

So, is laser periodontal treatment effective?

Okay, so we’ve looked at gum disease, what causes it, and how to treat it, but is laser periodontal treatment effective? – Absolutely.

Cant find what you're looking for?

We would love to answer any dental queries you may have. Our friendly team of dentists are only a call away.